Serving the Marine Industry since 1936

NEKO SHIP SUPPLY is centrally located in Algeciras, serving all the major ports of Spain and the port of Gibraltar as well. We strongly believe that the quality of our mooring ropes and the prompt service rendered by our agent, NEKO SHIP SUPPLY, can fulfil all your needs to your full satisfaction.

For one more time Katradis Group of companies participated in the SMM 2014 exhibition at the same spot - A1. 209 – Katradis stand was exceptionally well set up, giving us the pleasure to bring to our visitors up to date concerning our products such as HMPE ropes (Sirious line) and Liquid Crystal Polymer (LCP) ropes.

Katradis Group of Companies is planning an equally impressive and dynamic presence in upcoming international exhibitions. 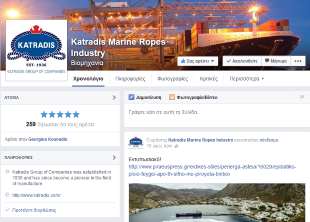 Katradis Group of companies has now established a presence in the social media as well, setting up a facebook page.

You are most welcome to visit the page and become our friends.

We would like to inform our customers that Katradis Marine Ropes Industry SA and Katradis VEP SA have renewed their BS EN ISO 9001:2008 certificates until August 05 2015. You can find the renews ISOs in our CERTIFICATES' section.